To enquire about a market stand
mercado@eventsboquete.org

History of the BCP

In 2005 a group of 40 residents of Boquete put The Boquete Community Players together. It is now known simply as “The BCP”. It was started by Cora Kent and the first play was Ayn Rand's "Night of January 16th"...a court-room murder drama.

Over the next 4 years BCP did plays and musical shows in any nook and cranny that could be found in Boquete. The first venue was over the old Banistmo bank, diagonally opposite Farmacia Revilla.

Another venue was flooded on Opening Day of one of the plays, and the director, and actors with the help of the Boquete bomberos had to shovel and hose out everything since, obviously … “The Show Must Go On"!  Another time all the electricity went off and the cast and crew kept right on going with the help of cell phone and flashlights.

At the same time other roots were starting to grow. In 2005, Tuesday talks were started by Sylvan Cohen, and then in August 2006 moved to the Panamonte, when Dianne Heidke took over. Around the end of 2007, the talks moved to the Fundadores Hotel along with the beginnings of the Tuesday Market, which was started by Irene’s Books, which have since become part of the Handicap Foundation.

In 2009 Anayansi Menendez, owner of the Oasis Hotel, who was on the BCP Council at the time, offered a run-down building on her property, which had been unused for many years, for lease by BCP. 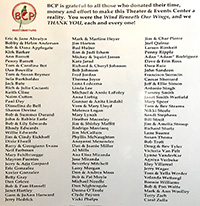 With dozens of Volunteer hands and many, many donations of money, time, equipment, and talent the BCP Theater and Centro de Eventos was created.

Also in 2009 the talks and market moved over to the new BCP building, and everything came together, The Tuesday Market, Tuesday Talks and BCP Theater were all together in what was to be their home for more than 10 years.

Since 2009 we have had many fine Productions, the Tuesday Market has become extremely popular, draws huge crowds of local residents and has even become a Tourist Destination, and continued the traditional Tuesday Talks in the Theater. There have been community and business events, fun birthday and Quinceañera parties and some beautiful weddings…. all on our grounds.  We have also had  a regular Christmas Sing-Along, held Sunday Movies, and had other charity and religious events in the theater.

BCP has attracted many people to come and live in Boquete with the sense of community that it has always brought. The theater has always worked because of the volunteers, many of which had no previous theatrical experience, but have since become regular participants.

We have had many different types of stage productions – serious and comic plays, musicals, The Olde Tyme Radio Show and the Good Timey 60’s music show, to name just a few.
We also had stage productions from other organisations including musicals by the International School and a play in Spanish by a group from Panama City.

The year 2020 has been different in many ways.
In February we were told that the lease for the building was no longer going to be with BCP, but rather with TapOut, the operators of the bar/restaurant area, and as a result the way of BCP working was going to be very different in the future. Two weeks later Covid-19 hit, and everything came to a halt. However during that time, with the market not being taken up by Tapou, we were able to negotiate a new, larger venue for the Tuesday Market – just across the road in the Arco Iris Salon on the grounds of the Feria. the Tuesday Talks became Community Chats and moved to the Boquete Library.

For future productions we had made an arrangement for BCP to continue to have use of the theater but that agreement was terminated by the lease holder and we were obliged to remove all our property from the building and put it in storage for future use.

As Boquete slowly gets use to the “new normal”, we are exploring new ways of moving forward with the community, and we will continue to be The Heart of the Community.

There are of course many details missing and we would welcome any more information to add to the history, or any corrections to the above.
If you can add anything please email This email address is being protected from spambots. You need JavaScript enabled to view it.